Entries will be judged on creativity and originality. Music, images, and video clips included must be copyright-free, legally licensed by obtaining the copyright holder's permission, licensed through Creative Commons licensing or be entirely original content created by the teen (s) submitting the video (http://creativecommons.org).

If you need more information on copyright law, watch the below video! You might be surprised on what is covered by copyright law.

This week, the library honors J. R. R. Tolkien, the brilliant author of The Hobbit and The Lord of the Rings. 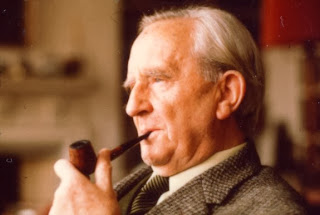 "John Ronald Reuel Tolkien (1892-1973) was a major scholar of the English language, specialising in Old and Middle English. Twice Professor of Anglo-Saxon (Old English) at the University of Oxford, he also wrote a number of stories, including most famously The Hobbit (1937) andThe Lord of the Rings (1954-1955), which are set in a pre-historic era in an invented version of the world which he called by the Middle English name of Middle-earth. This was peopled by Men (and women), Elves, Dwarves, Trolls, Orcs (or Goblins) and of course Hobbits" (The Tolkien Society).


If you have already read Tolkien, then check out 100 things you didn't know about the Lord of the Rings and these 9 signs that you have been reading too much Tolkien!

The library is celebrating Tolkien with crafts, candy, trivia, and displays. So come test your knowledge with Hobbit trivia, write your name in Dwarven runes, color a picture of Frodo, or just check out some Tolkien books. 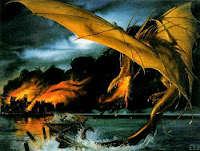 The Extra Credit Program page has been updated! Check it out to see the requirements for the program or to access the forms.

The deadline for the first quarter is coming up soon so hurry if you want to participate!

The 15 Types of Readers

To start your week off right, find out what type of reader you are! I am the emotionally-invested reader. How about you?

What type of reader are you?

Have you noticed the new resources added to the LMC's website?

EasyBib is a tool to help you cite your resources accurately and quickly. You can even store and organize your notes for later use! Check out the free version here for quick citing or log into your Google Drive to access all of EasyBib's tools.

Access both EasyBib and the Teen Health and Wellness database on the right hand side of the LMC website.

Keep checking back to the LMC's website for new resources and information! As always, contact Ms. Bava with any questions.

What did you read this weekend?

Did you read anything good this weekend??

Over the weekend, I read The Caged Graves by Dianne Salerni.

Set in Pennsylvania after the Civil War, this is the story of a young women, Verity Boone, who travels back to her childhood home to reconnect with her father and to marry a man she has never meet. In just the first few days of her arrival, she discovers the graves of her mother and aunt are enclosed in iron cages outside the local cemetery. Nobody will explain why to Verity, but there are rumors of buried treasure and witchcraft. If you enjoy historical fiction and mysteries, you should check this book out!

The LMC just got a shipment of new books in. Two books that I am personally excited about are Strangelets by Michelle Gagnon and School Spirits by Rachel Hawkins:

17-year-old Sophie lies on her deathbed in California, awaiting the inevitable loss of her battle with cancer…
17-year-old Declan stares down two armed thugs in a back alley in Galway, Ireland…
17-year-old Anat attempts to traverse a booby-trapped tunnel between Israel and Egypt…

All three strangers should have died at the exact same moment, thousands of miles apart. Instead, they awaken together in an abandoned hospital—only to discover that they’re not alone. Three other teens from different places on the globe are trapped with them. Somebody or something seems to be pulling the strings. With their individual clocks ticking, they must band together if they’re to have any hope of surviving.

Soon they discover that they've been trapped in a future that isn't of their making: a deadly, desolate world at once entirely familiar and utterly strange. Each teen harbors a secret, but only one holds the key that could get them home. As the truth comes to light Sophie, Declan, Anat, and the rest must decide what to do with a second chance at life—if they can survive to claim it.

Fifteen-year-old Izzy Brannick was trained to fight monsters. For centuries, her family has hunted magical creatures. But when Izzy’s older sister vanishes without a trace while on a job, Izzy's mom decides they need to take a break.

Izzy and her mom move to a new town, but they soon discover it’s not as normal as it appears. A series of hauntings has been plaguing the local high school, and Izzy is determined to prove her worth and investigate. But assuming the guise of an average teenager is easier said than done. For a tough girl who's always been on her own, it’s strange to suddenly make friends and maybe even have a crush.   Can Izzy trust her new friends to help find the secret behind the hauntings before more people get hurt?
--------


So come check out these books and the other new books at the LMC! Or if you read anything great that you would like to share with your fellow students, let Ms. Bava know.
Posted by Trinity Library Media Center at 9/03/2013 01:18:00 PM No comments: